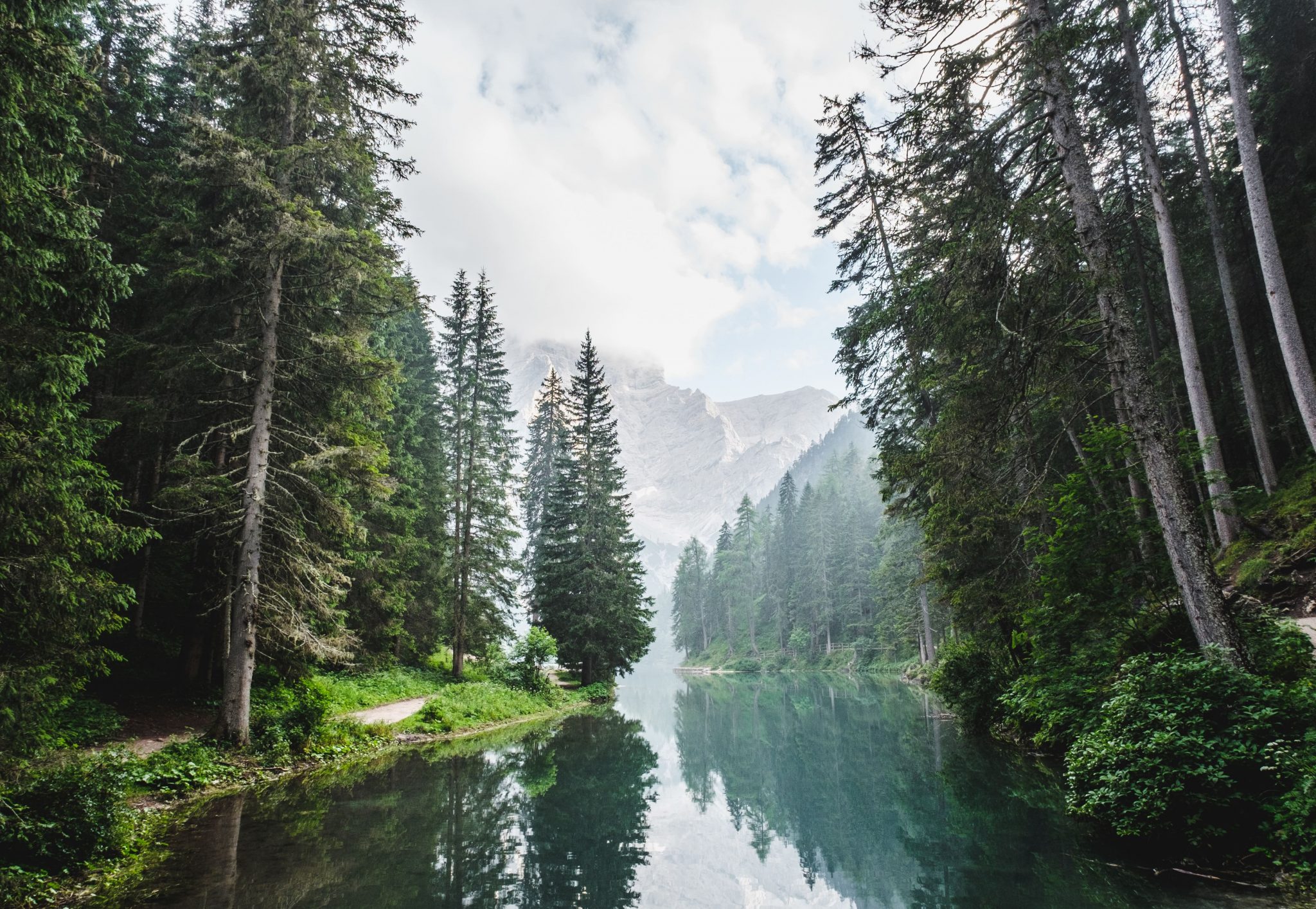 Just a quick note to say that this post includes Amazon affiliate links. If you can, support a local bookshop instead though 💚

If I asked you to name a book about living in the woods, you might say Walden, Henry David Thoreau’s memoir of his time in a cabin in the woods by Walden Pond.

I’ve been gravitating towards other books like Walden lately. By reading them, I’ve been thinking about my own life and the balance I want between fast and slow, remote and connected, private and public living.

To my mind, books like Walden are about carving out a life close to nature, whether for the long-term or just a short while, and limiting the influence of the outside world. It’s about a slower, more self-reliant, and more grounded existence; usually with a lot of reflection, writing, and pottering around in nature.

Some of these books are about cabins in the woods, but others are about mountains, Arctic tundra, and a broader sense of wilderness.

From the Austrian Alps to the Appalachian Trail and Alaska, I hope these books speak to your adventure-loving, solitude-seeking, and nature-yearning bones as they have to mine.

In 1977, aged seventeen, Eustace Conway left his family’s comfortable suburban home to move to the Appalachian Mountains and be self-sufficient. For more than two decades he has lived there, making fire with sticks, wearing skins from animals he has trapped, and trying to convince Americans to give up their materialistic lifestyles and return with him back to nature.

This is Elizabeth Gilbert’s tale of his story, which toes the line between man and myth. It was published during her time at GQ Magazine in 2002, before the explosion of Eat, Pray, Love fame four years later. The Last American Man was nominated for National Book Award in non-fiction.

“I live in nature where everything is connected, circular. The seasons are circular. The planet is circular, and so is the planet around the sun. The course of water over the earth is circular coming down from the sky and circulating through the world to spread life and then evaporating up again. I live in a circular teepee and build my fire in a circle. The life cycles of plants and animals are circular. I live outside where I can see this. The ancient people understood that our world is a circle, but we modern people have lost site of that.”

2. Consolations of the Forest: Alone in a Cabin in the Middle Taiga by Sylvain Tesson

This book takes us to a rustic cabin on the shores of Lake Baikal, about 50 km south of Irkutsk, where Sylvain Tesson undertook a project to live alone for six months in 2010. It was here that he wrote Consolations of the Forest.

“To be alone is to hear silence. Listening to silence. Now that’s a worthwhile pastime,” writes Tesson.

3. Into the Wild by Jon Krakauer

In April 1992, Christopher McCandless hitchhiked to Alaska and walked alone into the wilderness north of Mt. McKinley. He had given $25,000 in savings to charity, abandoned his car and most of his possessions, burned all the cash in his wallet, and invented a new life for himself. Four months later, his decomposed body was found by a moose hunter. How McCandless came to die is the unforgettable story of Into the Wild.

Admitting an interest that borders on obsession, Jon Krakauer searches for the clues to the dries and desires that propelled McCandless – which the adventurous types among us may relate to all too well.

“The very basic core of a man’s living spirit is his passion for adventure. The joy of life comes from our encounters with new experiences, and hence there is no greater joy than to have an endlessly changing horizon, for each day to have a new and different sun.”

4. At Home in the Woods: Living the Life of Thoreau Today by Bradford Angier and Vena Angier

Bradford Angier and his wife Vena decide to follow in the footstep of their hero Henry David Thoreau, and forsake their city lives for the rustic simplicity of life in the woods of British Columbia. This is their story of creating their own Walden.

“A lot of us are working harder than we want, at things we don’t like to do. Why? In order to afford the sort of existence we don’t care to live.”
― Bradford Angier, On Your Own In The Wilderness

“The singing wilderness has to do with the calling of the loons, northern lights, and the great silences of a land lying northwest of Lake Superior”, Olson writes. “It is concerned with the simple joys, the timelessness and perspective found in a way of life that is close to the past. I have heard the singing in many places, but I seem to hear it best in the wilderness”.

Olson tells his story through descriptions of the simple events in nature that bring meaning to his life: picking berries, looking for pine knots, fly-fishing, hiking through the forest, paddling a canoe. “The movement of a canoe is like a reed in the wind”, he writes. “Silence is part of it, and the sounds of lapping water, bird songs, and wind in the trees. It is part of the medium through which it floats, the sky, the water, the shores”.

“Joys come from simple and natural things; mist over meadows, sunlight on leaves, the path of the moon over water. Even rain and wind and stormy clouds bring joy.”

6. Wild: From Lost to Found on the Pacific Crest Trail by Cheryl Strayed

Although not a tale about a cabin in the woods, Cheryl Strayed’s memoir of hiking the 1100 miles of the Pacific Crest Trail is one of the best-known and loved memoirs about heading into the wilderness. Read it and dream of packing a backpack (hopefully not as heavy as Monster) for a multi-day hike in nature.

“Alone had always felt like an actual place to me, as if it weren’t a state of being, but rather a room where I could retreat to be who I really was.”

This is Annie Dillard’s personal narrative of one year’s exploration on foot in the Virginia region through which Tinker Creek runs. In the summer, Dillard stalks muskrats in the creek and contemplates wave mechanics; in the fall, she watches a monarch butterfly migration and dreams of Arctic caribou.

She tries to con a coot; she collects pond water and examines it under a microscope. She unties a snake skin, witnesses a flood, and plays King of the Meadow with a field of grasshoppers. The result is an exhilarating tale of nature and its seasons.

“The answer must be, I think, that beauty and grace are performed whether or not we will or sense them. The least we can do is try to be there.”

What would a list about escaping into nature be without John Muir? This collection is essential for nature lovers, celebrating the intimate connections between the human and natural world. As wild places become increasingly scarce and threatened, John Muir’s writing is more important than ever.

“Thousands of tired, nerve-shaken, over-civilized people are beginning to find out that going to the mountains is going home; that wildness is a necessity”

9. One Man’s Wilderness: An Alaskan Odyssey by Sam Keith (based on the journals and photographs of Dick Proenneke)

To live in a pristine land unchanged by man…to roam a wilderness through which few other humans have passed…to choose an idyllic site, cut trees, and build a log cabin…to be a self-sufficient craftsman, making what is needed from materials available…to be not at odds with the world, but content with one’s own thoughts and company…

Thousands have had such dreams, but Dick Proenneke actually lived them. He found a place, built a cabin, and stayed to live self-sufficiently in nature.

One Man’s Wilderness is a simple account of the day-to-day explorations and activities he carried out alone, and the constant chain of nature’s events that kept him company. From Dick’s journals, and with firsthand knowledge of his subject and the setting, Sam Keith has woven a tribute to a man who carved his masterpiece out of the beyond.

10. We Took to the Woods by Louise Dickinson Rich

In her early thirties, Louise Dickinson Rich took to the woods of Maine with her husband. They found their livelihood and raised a family in the remote backcountry settlement of Middle Dam, in the Rangeley area.

This is the book that Rich wrote after morning chores, first published in 1942. It’s her story of how she and her husband made their dream come true in the woods.

“A house you can rebuild; a bridge you can restring; a washed-out road you can fill in. But there is nothing you can do about a tree but mourn.”

11. Woodswoman I: Living Alone in the Adirondack Wilderness by Anne LaBastille

When ecologist Anne LaBastille and her husband divorced, she needed a place to live. Through luck and perseverance, she found the ideal spot: a 20-acre parcel of land in the Adirondack mountains, where she built the cosy, primitive log cabin that became her permanent home.

Miles from the nearest town, LaBastille had to depend on her wits, ingenuity, and the help of generous neighbours for her survival.

In precise, poetic language, she chronicles her adventures on Black Bear Lake, capturing the power of the landscape, the rhythms of the changing seasons, and the beauty of nature’s many creatures.

“…invite a person to a log cabin in the woods for a weekend. The true personality emerges every time.”

12. The Final Frontiersman: Heimo Korth and His Family, Alone in Alaska’s Arctic Wilderness by James Campbell

Hundreds of hardy people have tried to carve a living in the Alaskan bush, but few have succeeded as consistently as Heimo Korth.

Originally from Wisconsin, Heimo traveled to the Arctic wilderness in his feverous twenties. Now, more than three decades later, Heimo lives with his wife and two daughters approximately 200 miles from civilization—a sustainable, nomadic life bounded by the migrating caribou, the dangers of swollen rivers, and by the very exigencies of daily existence.

“I settled into a rhythm—teaching the kids, tending the garden, canning, checking the fishnets, raising rabbits, hauling wood. All of that gave great purpose to my life.”

13. A Whole Life by Robert Seethaler

A Whole Life is one of my all-time favourite books. It tells the tale of an ordinary life lived out quietly by the mountains, but that is nothing less than powerful.

“You can buy a man’s hours off him, you can steal his days from him, or you can rob him of his whole life, but no one can take away from any man so much as a single moment. That’s the way it is.”

Mountain Song is the story of my three years spent living by the mountains in Switzerland with waterfalls, mountains, and soaring eagles for company. If you love books about nature, adventure, and slowing down, I hope you’ll love it.

You can get the limited edition illustrated hardcover on the Live Wildly Store or a Kindle copy via Amazon.

“I wanted to live how I really wanted, even if that meant turning against what everyone I knew was doing. I didn’t want to be close to the action or save on rent by sharing space anymore. I wanted to live somewhere with quiet views of the mountains, surrounded by nature and with plenty of time to sit, read, write and think.” 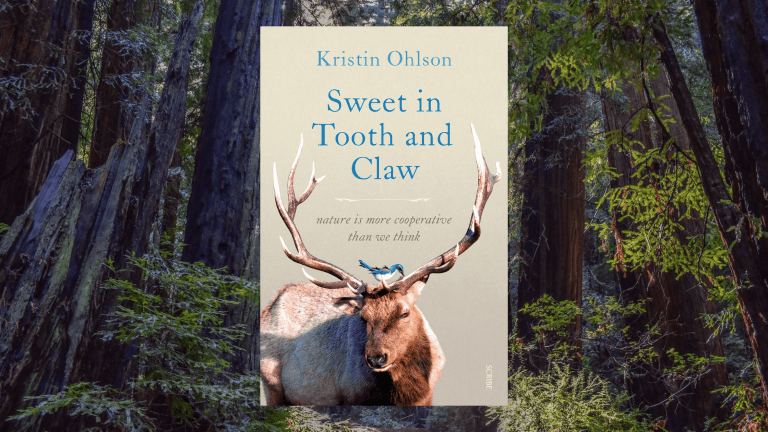 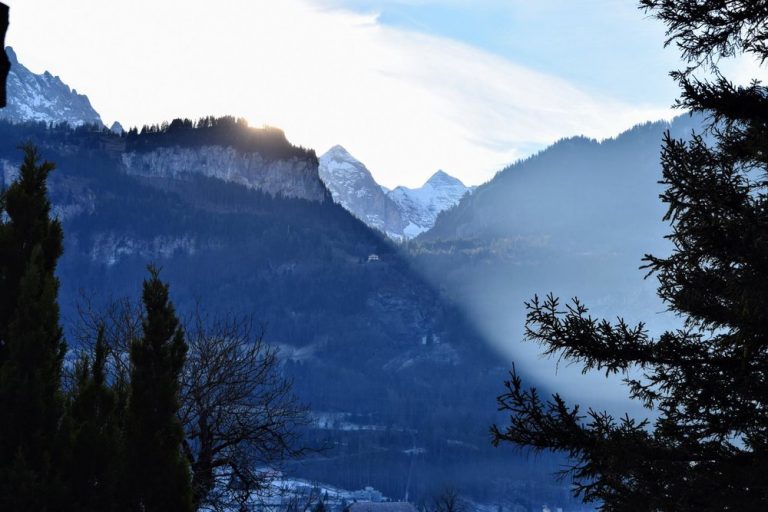 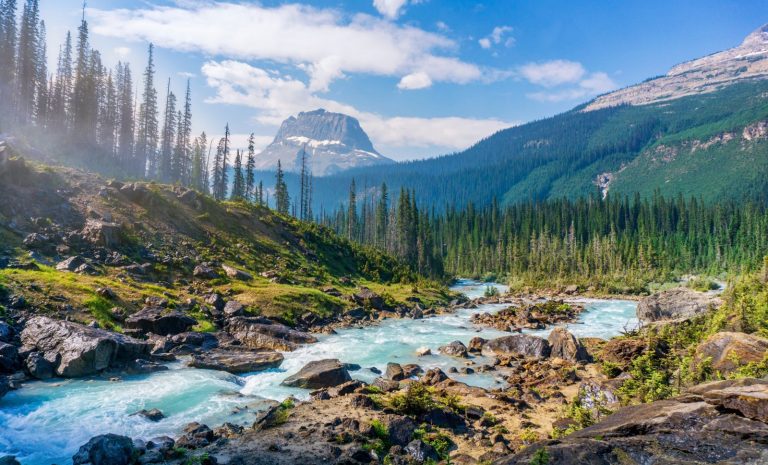 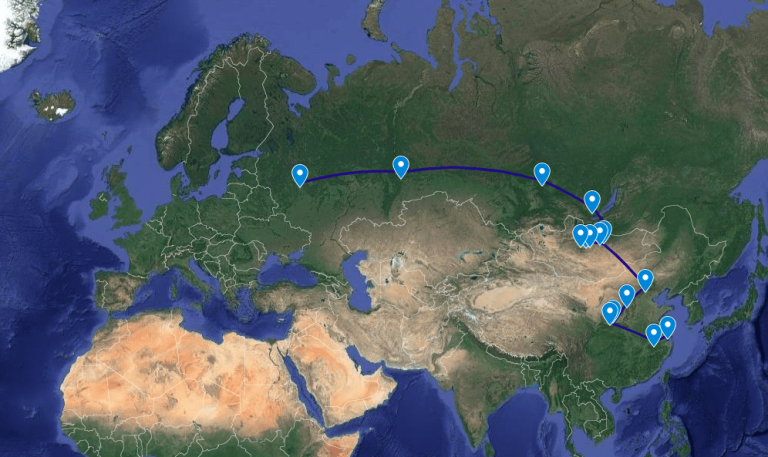 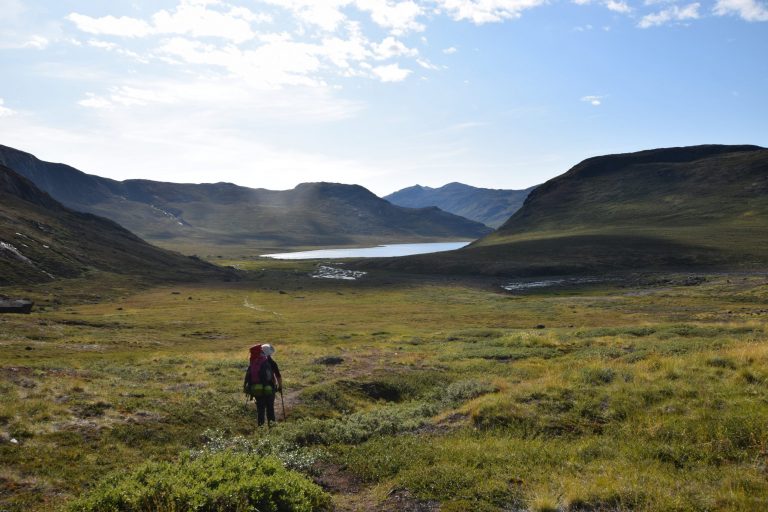 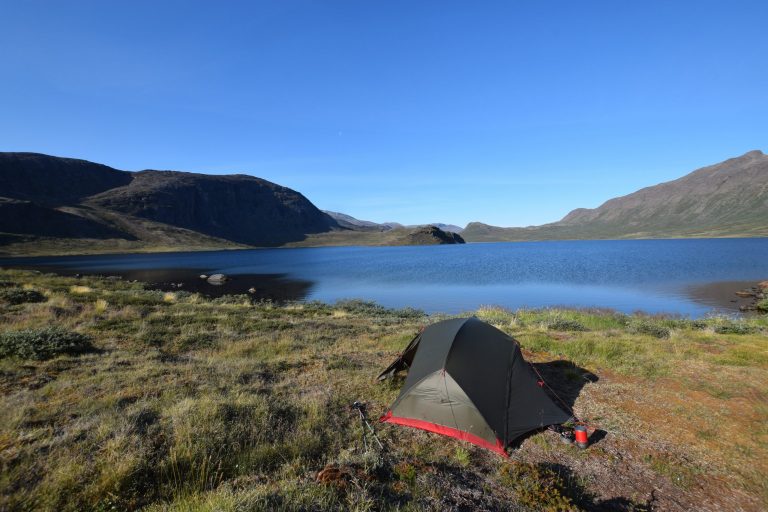 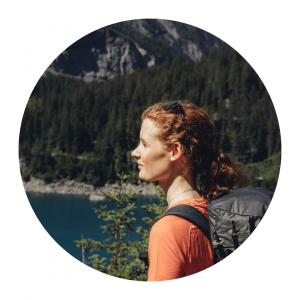